Email Address is a required field 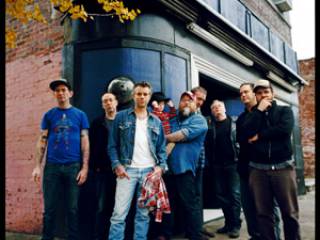 Doors open at 4:00PM
Share this event with friends!
"In case there was ever any doubt, country music is always better when played by genuine Southerners."-Rolling Stone "Full of shabby glory."-Paste Lucero's sixth studio album and major label debut, 1372 Overton Park, is out on Universal/Republic Records. Produced by Ted Hutt (The Gaslight Anthem) and featuring horn arrangements by legendary Memphis session player Jim Spake (Al Green, John Hiatt, Solomon Burke, Cat Power), the record marks a decided turn toward the Memphis soul sound that has long informed the band's records from afar. 1372 Overton Park follows the band's 2006 release, Rebels, Rogues & Sworn Brothers, hailed by Pitchfork as "the best showcase for the band's taut dynamic yet." The new album's name comes from the address of the Memphis loft in which all four band members lived, practiced and even recorded portions of their 2003 release That Much Further West (the history of the space itself is even more colorful-in the `70s, 1372 Overton Park was a karate dojo where local resident Elvis Presley, among others, took lessons). Over recent years band members have gradually moved out leaving lead singer and guitarist Ben Nichols the sole resident of the space until word finally came down that the building would be sold and demolished. Almost as if marking the end of an era not only for the building but for the band as well, this record turns the page and signals a strong move toward the Memphis soul sound that has long served as an influence for the group. Nichols explains, "When [saxophonist] Jim Spake put that first horn track down, we began thinking of the record as having a certain sound. We heard pieces of Memphis history being played over our songs and it floored us and we just went with it." While 1372 Overton Park serves as a love letter to Memphis and its musical heritage, the band has far from abandoned the country/rock/punk influences that they've become known for over their previous five records and countless tour dates in front of rabid fans. "I think the fact that we don't claim a genre is very important to what Lucero is," according to Nichols.
You must be signed in to add this to your order. Sign in here or create a new account.